February 22, 2017 Like this
Print screen of posts between both anti-Duterte administration surprised the netizens after became a viral issue over the internet. 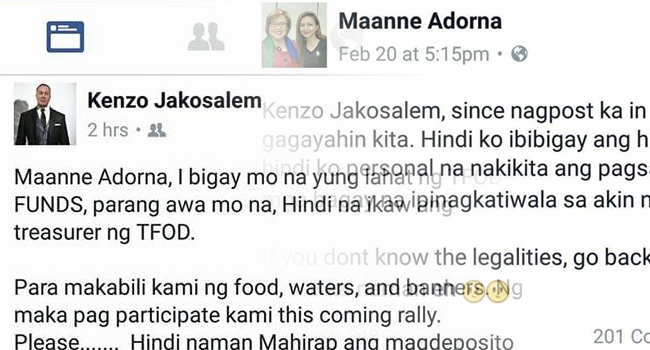 In the said print screen image, Mr. Kenzo Jakosalem mentioned Maanne Adorna on his Facebook post accusing his colleague of not turning over the fund to purchase food, water, and banners for the upcoming rally on February 25 to 26 as a part of the EDSA People Power Anniversary.

On the other hand, some explained the rally funds isn't allowed to be transferred without any procedute and tried to reconcile the two involved parties.

Jakosalem was even advised to delete his post because netizens might caught the interest of their fellow netizens.


Their fellow protesters tried to pacify the both of them and quoted 'Tuwid na Daan' must nit argue over rally funds.

These two people according to source are the leaders of the protester group.